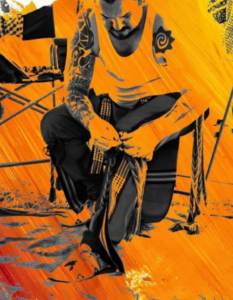 Dante Biss-Grayson is an Osage artist, fashion designer, poet, writer, and activist. Based on his strong roots in the Osage Nation, Dante uses the archetype as an image to guide his artistic process, getting into a trance-like state and letting the work find itself. He adheres to the Zen tradition of simple strokes converging with one idea, leaving on the canvas one decisive expression.

Dante’s art is an expression of his experiences as a combat veteran combined with the PTSD those experiences begot him. Having studied art before enlisting, he became reacquainted with painting as a means of confronting and expressing the loss, the absurdity, and the beauty of war. He writes that he “grew up as the apprentice/protégé and son of [artists] Earl Biss and Gina Gray,” surrounded by the radical art of 1960s/70s-era Institute of American Indian Arts.

Dante started his journey into art when he was very young in Santa Fe, NM where he has taken many awards at the SWAIA Indian Market. His artwork is featured in many private and museum collections. His work at the Big Rain Gallery includes his paintings and his fashion designs. He is owner and executive designer of the Sky-Eagle Collection featured at the gallery. He has studios in the USA and Bali, where he, his wife and family assist to make his designs a reality.