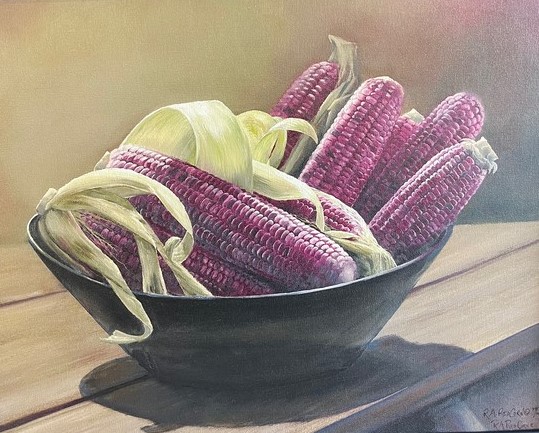 R.A. Red Corn is an Osage artist specializing in paintings and beadwork. Much of her inspiration comes from her immediate and extended Osage family, the influence of her tribe and historical photos. Many of the still life paintings that R. A. Red Corn has produced feature traditional clothing and dance items that belong to her and her family, these have deep emotional ties and bring her close to the scenes that she paints. Many of the paintings represent memories of her past. For the viewer of her painting, she hopes to elicit a memory or feeling of peace and tranquility.

As a child, Red Corn’ Grandmother and Great Aunt had a shop called the Red Man Store, featuring traditional men’s and women’s Osage clothing for ceremonial dances and powwows. In the summer, Red Corn’s Grandmother taught her to bead the edges of the ribbonwork on the men’s suit leggings. The beading she does today is much different from that as a child, but the importance of the spacing and quality of work is still there today.Red Corn attended the University of Oklahoma and received a Bachelors of Arts in Education from the University of Kentucky. She taught elementary and middle school for many years. During one summer off, she began painting in watercolor and discovered a talent she had not known about. Years later she switched to painting with oils and acrylics. Around 2014 she also started handcrafting fully beaded fans and dance sticks featuring traditional Osage designs used in tribal dances.