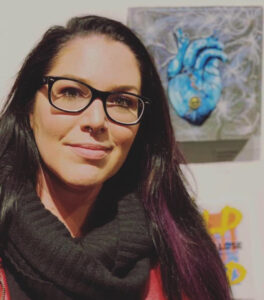 Sheridan Bradshaw Tonche (Osage/Quapaw) is a mother, horseback riding instructor, and artist. Art is something she dove back into after having her twins. Art has always been in her life but after becoming a mom, it became therapy. She considers creation of her art as a way to maintain who she is regardless of what other roles she takes on at each stage of her life.

Sheridan’s work has always represented a contrast between right and left brain which is very much a personal struggle. She is incredibly analytical and logical in her thinking and simultaneously an imaginative empath. In school she was in both a digital art class and anatomy and physiology in the same semester. She found myself incorporating the structures and systems she was studying into her art projects. She found the structures and how perfectly they functioned to be fascinating and beautiful. Anatomical subjects have been a part of her work since that semester.

As she worked to get out of her comfort zone, she found new ways to represent this contrast. As of late, subjects in geometric patterns with color and movement have moved to the forefront of her work. She wants her art to speak to both sides of the brain. She works primarily in acrylic along with mixed media, epoxy and graphite. Sheridan is a resident artist at the Hardy and Nance Studios in Houston where she lives with her husband Manny and her twins.